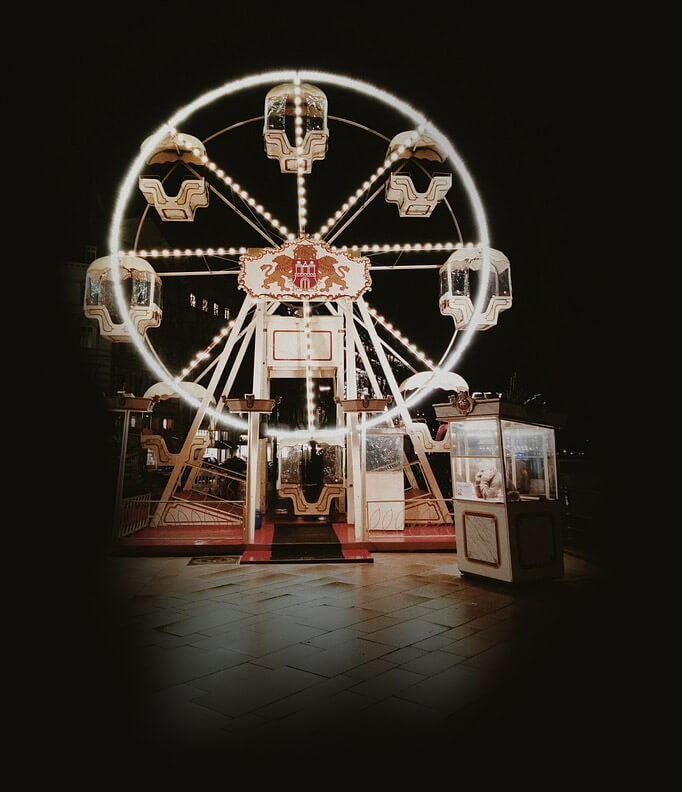 he night Uncle John died our mom took us to the carnival. Right after she found out. He was hit by a car while trying to cross Route Six. I heard Uncle Pete describe it as a “sick accident” before my mom dragged us out of the rental beach house, into the car, and off to the carnival. Our first stop was the Ferris wheel. The ticket guy seemed skeptical about letting us onto the ride, staring sideways at my mom’s puffy eyes, but waved us through anyway. It’s not like we were physically sick, just obviously bereaved. Not technically grounds to turn people away on. Not like we were going to throw up on anything.

As we climbed into the cart, my weeping mother pulled a roll of toilet paper out of her purse, ripped off a piece, blew her nose into it, then tossed the crumpled bunch over the side of the ride. The ticket guy looked pained as he shut us into our cart. I wondered if a lot of people ride the Ferris wheel crying.

The wheel started turning and I watched the ticket guy pick up the used toilet paper ball my mother had chucked on the ground. I lost sight of him after he’d picked it up. My stomach sank as we rose, and my mother slumped against the side of the cart, sniffling. The yellow blubs made her skin look sick, the dull light catching in the streaks of water that ran down her cheeks.

“I’m sorry, you guys,” she said, again, after a few silent minutes spent listening to the grandstand music pumping through the speakers, “I just wanted you guys to have a good week of vacation. The whole family, together. That never happens. And you were so excited about the carnival.”

Her phone rang and she let it buzz next to her on the bench.

“So we can at least have a little bit of fun, right? Do you want cotton candy after this? Or maybe we can go on another ride? I don’t think I’ve taken either of you on the teacups before.” The phone stopped buzzing next to her for a second and then started again. She kept talking, about elephants, and sideshows, and whack-a-mole games, and blooming onions. A glaze formed in her eyes as though her own fantasy was sweeping her away to a better, kinder place. It was like she almost started believing her own bullshit.

The Ferris wheel, oblivious to her despair, did its part and pushed us higher. My sister Alice, overcome with the excitement of being five and the excitement of cotton candy promises, was bouncing on the cart’s bench. It made us rock back and forth. It made me a little sick. In her crazed attempts to block out what had happened, my mom had forgotten that I hate heights and I’d forgotten to remind her.

The phone buzzed and buzzed next to her.

“You gonna get that?” I asked. My mom shook her head and crossed her arms, angling further into the side of the cart, as though physically pushing herself as far away from the phone as possible would make it go away. Maybe it was an object permanence experiment. Maybe she was seriously regressing.

I was getting a headache. Whoever it was wasn’t going to stop calling so I picked up the phone instead.

“Where the fuck are you?” asked Uncle Pete.

“Shit- I mean shoot. Shoot. Sorry.” He hadn’t meant to swear at me. He still thought I was too young for swear words even though I was eighteen, even though last night he and Uncle John and I smoked a last cigarette together, one that he gave me, on the back porch of the beach house after the two of them had too much to drink.

“Can you give me to your mother?”

My mother, on the other hand, did not think I was too young for swear words and grabbed the phone from my hands. “What the fuck Melanie, answering my phone like that, are you fucking crazy?”

She lifted the phone to her ear to talk to Uncle Pete. “What? I’m at the carnival. Yeah, I told the girls we’d go. Of course I remember what happened. The girls wanted to go to the carnival. They wanted to ride the Ferris wheel. Melanie’s not afraid of heights, that’s ridiculous.”

She hung up the phone and shoved it into her purse. If I looked at the floor of the cart, the world sort of stabilized and that helped to settle my stomach, if not my headache. I heard the phone start buzzing again, drilling into my brain through the sides of my mom’s purse. She jolted up and frantically rustled around inside the bag, until she clutched the damn phone so tightly I thought it would burst.

“Pete that fucker,” she said, and tossed the phone over the edge of the cart.

“It’s not Uncle Pete’s fault, you know” I said. My mom just shook her head.

“Some cotton candy sure sounds good, doesn’t it honey?” she asked Alice, who was half dangling off the side.

When the Ferris wheel stopped the guy who fastened us in had the phone in his hand. He’d gone to find it. It was only lying a few feet away from the wheel.

“Keep it,” my mother said, and stormed away clutching Alice’s hand a little bit too tightly.

I stayed seated in the cart.

“Wanna go around again?” The guy asked. “I won’t charge you the extra tickets, if you do.”

The phone was still buzzing and he passed it over to me.

“You’re the most popular girl on Cape Cod,” he said.

He shot me an apprehensive smile and walked away. I flipped the phone open.

And the wheel started turning.

Do many people ride the Ferris Wheel crying?

Yes, but only on Sundays

Yes, but only on Sundays

No, but it has happened before

No, but it has happened before

Yes, it is a surprisingly sad experience

Yes, it is a surprisingly sad experience

Emma Day is a Baltimore based writer and occasional social media user whose work pops up very sporadically in a way she hopes cultivates an air of mystery and intrigue.

Thank you! Your submission has been received!
Oops! Something went wrong while submitting the form
Issue 16

She Was An American Girl

That is madness — love is madness. Madness doesn’t play by the rules. Its strength is in transcending structure, in working around it.
archive
quotes
about
issues
propaganda
submit (closed)