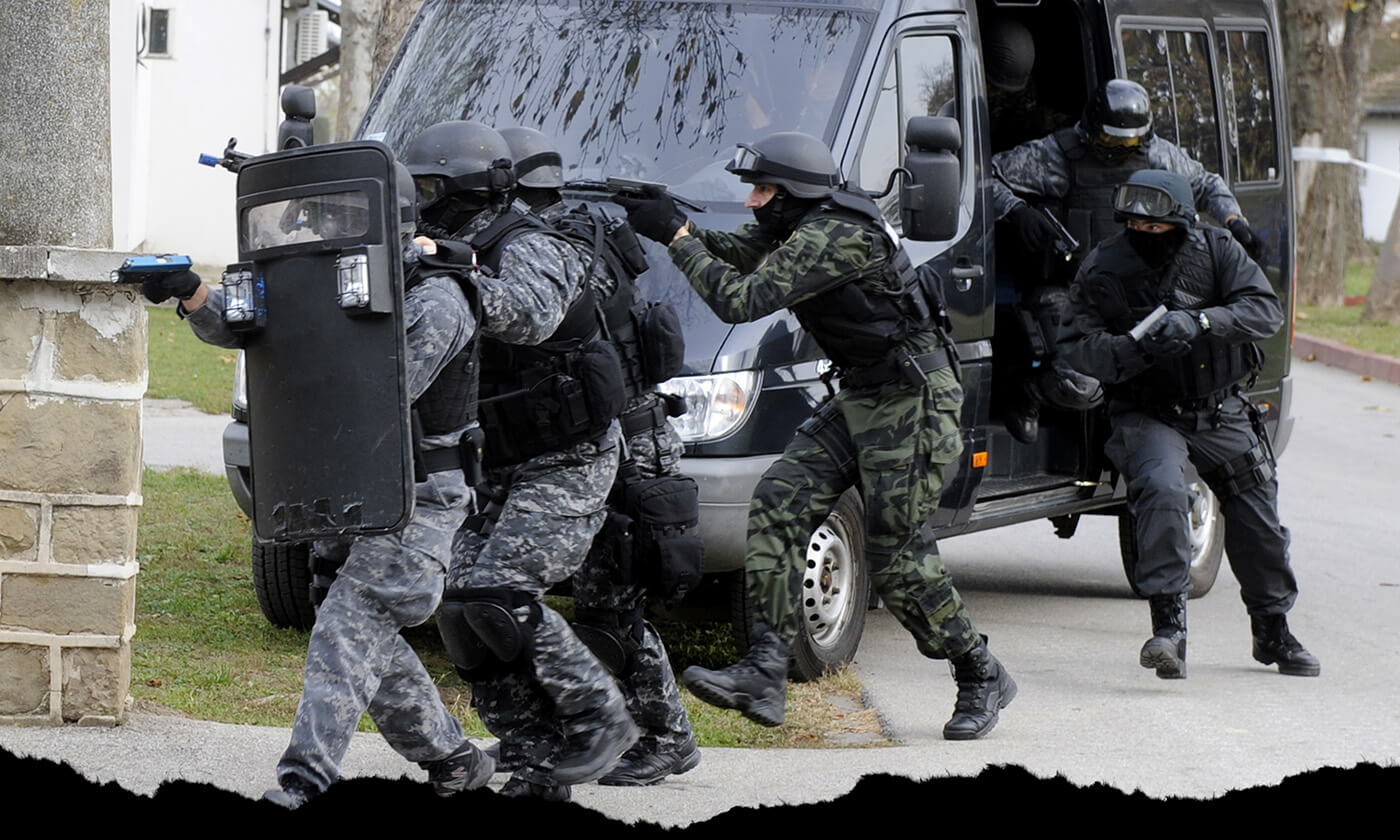 lack clad and armed, the team of men that had suddenly intruded on what was otherwise a quiet meal for one remained silent, awaiting further instruction from their captain. Red dots paced slowly across closed blinds and the back door which led to the kitchen where Dave was sat.

He had barely any time to chew what cheap noodles he had just shoveled into his mouth before this congregation of bullet proof vests and submachine guns had burst into his home. Their heavy footsteps had become little more than a tiptoe once they had securely entered Dave's property.

"Excu-" Dave began before he was cut short by the SWAT member who had took position behind him, placing a gloved hand over his mouth. The man leaned in to whisper.

"Sir, I strongly advise you get under the table and await further instruction." He whispered, slowly taking his hand away from Dave's mouth.

With blind compliance, Dave proceeded to push his chair back and get on his knees to crawl under the table in front of him, a cheap dining table which had never been used for cover before, suprisingly.

The timing of the officer's instruction couldn't have been better as Dave's quiet Sunday dinner faced further interruption. His windows burst and his blinds danced wildly as they were riddled with identical holes from the gunfire outside. Shattered glass and splintered wood from the window frames began to litter Dave's kitchen floor, and that wasn't all.

The team of men in his home had little time to react, and within the first few seconds of chaos, Dave was joined on his floor by two of the officers, one of which was unfortunate enough to catch a bullet in the visor of his helmet, leaving a bullet hole where his left eye used to be, which was now vacant and filling his helmet with blood. The second appeared to have better luck as he was on the floor next to Dave clutching at his left arm, his mask obscuring a pained look on his face.

The rest of the team had immediately returned fire, with more uniform precision than the attackers who had simply redecorated Dave's kitchen with a series of burst fire. The identical intruders took up tactical positions around the kitchen, taking trained shots of their automatic weapons through the clearings in the torn blinds. The gunfire echoed throughout the kitchen, and Dave couldn't even form an opinion of the situation over the deafening and deadly exchange.

Three members of the team remained as the shots ceased. A suspicious silence crept over the scene, and the man who Dave assumed to be captain made a series of hand gestures, the final of which was directed to the hall which led into the rear garden of his home. An officer approached the back of the kitchen wall which made the corner of the hallway leading to the back, reconfirming his grip on his rifle before he breached the corner.

His actions were cut short as one of the previously unseen assailants was waiting for the opportunity the SWAT team had kindly provided. The attacker closed the gap between him and the officer, sinking a large knife in his throat, right under the jawline. The officer fired in a panic, reinstating the previous soundtrack of violence that had only recently receded. The captain who gave the order raised his rifle and wasted no time in taking a single shot. The bullet entered above the assailants right eye and left a neat crimson hole, which left a trail of blood falling onto his brow. Dave, still under his kitchen table, observed that the exit wound must have been much larger judging by the poor Jackson Pollock imitation that had decorated his hall.

The officer who had tried to turn corner stumbled back into the kitchen, he had dropped his rifle to place both hands around his throat, and the heavy flow of blood made itself apparent by seeping through his fingers. The gurgling that had replaced his ability to speak ceased itself once he hit the kitchen floor, and the blood escaping from his throat pooled on the kitchen floor, its edges racing towards Dave, forcing him to scramble back into the door of one of his cupboards.

The captain and his remaining subordinate seemed surprisingly serene about the turn of events, and after a few moments of this sombre silence, a message, incoherent to Dave, blared from the radio positioned on the captain's left shoulder.

"Witness is secure, over." The captain returned, and walked over to a rather shaken Dave.

"Witness?" Dave feebly asked, not even nearly prepared to understand the situation he had been forced into.

After a while, another uniformed officer, not of the original five, entered the kitchen where the captain had now sat Dave back at his table. He looked intently at the bewildered resident before pulling his mask down, revealing a similarly confused expression. Turning to his captain, he explained his shock.

"Sir, that's not the witness." He explained, beads of sweat gathering on his brow.

"Well then who the fuck is it?!" The captain roared, taking a step towards his officer, gripping his ballistics vest. The officers reply was short and timid.

Dave was written by dr_bluthgeld.

Thank you! Your submission has been received!
Oops! Something went wrong while submitting the form
Issue 20

From My Window / Loneliness Becoming Snowfall in a Storm

"That's not a good idea, Ben. For one, we don't have great data on the actual effects of enhanced Luck..."
archive
quotes
about
issues
propaganda
submit (closed)

Eventually the Children Close Their Eyes